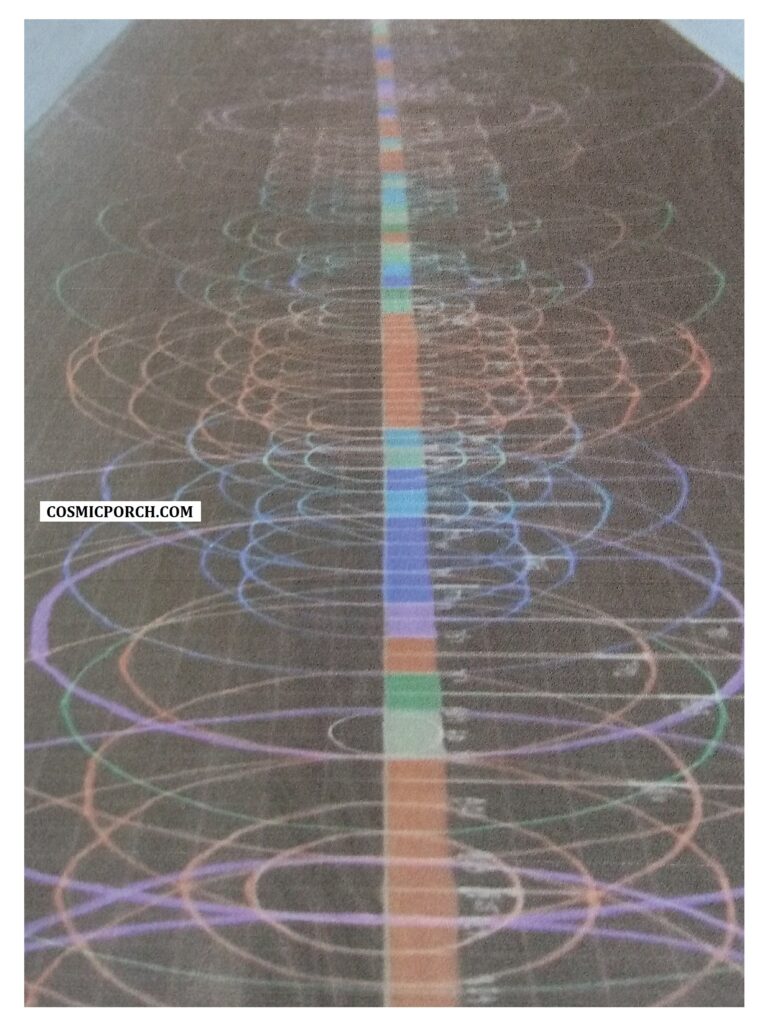 As a first time business owner stepping into a big pond, I was unsure how to market an already unusual amalgamation of components as a cohesive package. Let alone expand on them. Cosmic Porch was born in 2019 as a result of spiritual downloads received following a near death experience (NDE) in 2014. With no formal background in the area, I suddenly producing this Mathematical Physics following the NDE. What will be shared and brought together in this space will run the gamut of life experiences and insights had from unpacking those downloads, and expanding on and refining the information through subsequent research. Much like the universe we find ourselves in, what’s here will also continue to evolve.

Sharing the mandalas from the number line was the main impetus behind creating Cosmic Porch LLC. Selling them as Chakra Apparel would help activate and catalyze both those wearing them and those noticing them. They are the first of many doors. This is hardly about being a business owner through. It is about the scope of purpose behind the information itself and what it means to humanity. It may look like math and physics. Don’t let that fool you though. This is for our souls.

Along with the Earth, we are undergoing a massive transition right now. It is a transition of consciousness. While some of us are keenly aware of this Ascension process we are in, others aren’t aware at all. Regardless of your position on that spectrum, or even on the belief such a spectrum exists, what is here is as much a part of you as it is anyone else. The geometry shown above is what the Universe uses to create. It is literally part of you.

According to current understanding, the code embedded in our number line allowing for that geometry to manifest doesn’t exist. That’s because currently prime numbers are considered mostly random. Not only are they highly ordered, they are also algebraically and geometrically bound together. With the help of spirit and my higher self, I’ve discovered prime numbers act in pairs, which I named Prime Partners. Sometimes they even occur as triads. The torus is their structure of choice when expressing geometrically.

Due to the fundamental nature of number, all things that exist connect to this code. It seems nearly impossible for this not to be the foundation of the Unified Field.

The field within which all things are born and die, both on our planet and off. In physics, this is generally referred to as the Higgs Field. It is said to give atoms mass. Arguably, there is room to negotiate the characteristics of such a field, as the void of space would also have to be included. I truly believe that is the closest thing that could describe what we are witnessing as we view the geometries of our number line. It would surround planets and extend into the unmanifest as well. Such a field would contain what physics refers to as the 4 forces of nature. Within that field, gravity holds trees in the dirt and the dirt to the earth. The strong force holds the atoms of leaves together as electromagnetic light from the sun orchestrates the photosynthesis occurring within them. Finally it is all recycled by the weak force of decay which returns the nutrients back to the soil as the tree dies.

Regardless of which level of magnitude you’re measuring, be it the space between atoms or the distance to Andromeda, these prime number relationships underpin the fabric of space time between all distances. If the photon is the quantum particle of light (the ‘smallest’ bit of it) then these pieces of coded geometry fit the role of being the quanta of space time. It is incredible they occur at all, let alone that the majority of the code segments repeat themselves. To unify what physics considers the 4 forces of nature, this code would have to relate to both gravity and quantum gravity. And it would have to close our gap in understanding how the two correlate, as well as how the variance of behaviors at opposite ends of this spectrum are explained.

Just as gravity wraps planets around suns, the mandala is designed by the motion of number and geometry being wrapped around a center point. The same case is true with Modular Arithmetic which is at the heart of understanding this information in relation to time.

The context for all of this was given/shown to me as a child by what I now realize we refer to as ‘spirit.’ I was reminded of it all when I crossed over but now realize I showed up to this incarnation with this knowledge. We unlearn some fundamental parts of ourselves as we “grow up.” I now recall being in 3rd grade math class and having spirit ask me to look at the numbers to the left and right of 12.  Retracing that memory helped birth this discovery but I can clearly recall attempting to communicate this information when I was pre-verbal. Zooming out, many have wanted to get this information here for a very long time. I began working on this code with a group of other beings prior to incarnating here and have spent a number of lifetimes preparing to and attempting to deliver it.

Collaboration on this work will allow us to surpass boundaries that have long separated us both from each other and from other larger realities… which it will help prepare our consciousness for.

As unusual as my personal experience has been leading up to this (and continues to be), it is also part of this story. Before the NDE I would have had trouble believing much of this were someone else saying it. I understand and appreciate healthy skepticism. Once you experience these kinds of things though, that’s no longer a viable option. The watertight code birthed through visions, spirit, pre-incarnation and past life work, off-world origins, and an NDE weighs heavily in the favor of a richly layered, multidimensional reality that is MUCH weirder, more beautiful and and far more interconnected than many of us may currently like to think.